0
by Press Partners in Fellowship Blog

Published in the Chicago Tribune
April 21, 2013|By Mugambi Mutegi 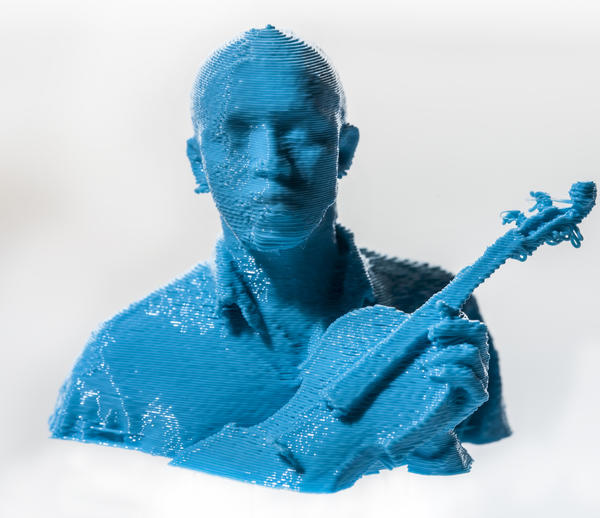 Portrait of reporter Mugambi Mutegi and a close-up still life of a 3D bust of him holding a violin in the Tribune Studio on Friday, 19 April 2013 for a business story. (Bill Hogan/Chicago Tribune)

It wasn’t exactly like stepping into a spaceship’s control room, but close.

I was at the 3D Printer Experience, 316 N. Clark St., which is set to open its doors Monday.

As the name suggests, its aim is to educate the public about 3-D printing and the opportunities it offers businesses and people.

The first order was to get the top half of my body scanned.

Employee Mike Moceri handed me a light brown plastic violin and ushered me onto a circular platform.

“Hold the violin to your collarbone and maintain your gaze just slightly above that scanner right in front of you,” Moceri said. The violin, which could be played, had been created with a 3-D printer by German firm EOS and was featured on the cover of The Economist in February 2011.

The scanner was rigged on a mast about 5 feet ahead of the platform. Moceri told me the platform would rotate 360 degrees in a process lasting one minute.

I had to remain motionless as the scanner shot infrared beams at my body. The beams return signals that are used to create a model on the computer.

“You’re doing fine, you’re almost there,” Moceri said with about 15 seconds left on the rotation.

I was told that a green shadowy image on a nearby computer screen was me, and that my computer image would be sent to 3-D printers so the “magic” could begin.

When the printing of my 3-D bust started, a nozzle sprayed what looked like melted blue plastic goo onto the printer’s platform in a back-and-forth and side-to-side motion.

I was witnessing my “rebirth,” thin layer upon thin layer of blue plastic in the belly of a $2,000 printer.

The printing, I was told, would last about 25 minutes.

To pass time, I sampled other offerings in the store. Employee Matt Spergel invited me to his exhibition stand where he had fired up software that allows people to design pendants. I tried my hand at it, and in five minutes I had a design that I was proud of. The pendants retail for $20.

Other 3-D software allows you to personalize and design things like curtain rings and doorknobs.

Another, much larger printer, priced at $250,000, uses powdered nylon, a much harder plastic used to create custom-designed doorknobs, for example, instead of the lighter corn-based plastic used to print my bust.

The busts, I was told, are perfect to put atop wedding cakes or given as gifts.

Now I understand why President Barack Obama was so keen on 3-D printing during his State of the Union speech in February. He hailed the technology as having the potential to “revolutionize the way we make almost everything.”